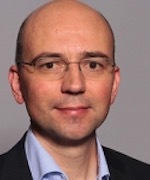 Marcel van Straten (Rotterdam, 1974) started in 1993 his study at the Faculty of Applied Sciences at the Delft University of Technology. His final project, performed at the Magnetic Resonance Imaging group, was entitled ’Simulation and in vitro measurement of relaxation effects of paramagnetic contrast agents’. In September 1999 he received the degree of Master of Science in Applied Physics (both the main variant and the business variant).

In December 1999 he started his Ph.D. project at the Department of Medical Physics and at the Department of Radiology of the University of Amsterdam in the Academic Medical Center under the supervision of Prof. dr. ir. C.A. Grimbergen, Prof. dr. G.J. den Heeten and dr. H.W. Venema. The main focus of this project was the application of image registration techniques in spiral computed tomography. Philips Medical Systems (Best, The Netherlands) financially supported this project since December 2003 and Van Straten worked as a research fellow on the further improvement and evaluation of the image processing software until June 2005. In March 2005 he successfully defended his Ph.D. thesis.

From August 2005 until December 2007 Van Straten was a postdoctoral researcher at the University of Erlangen-Nuremberg, Faculty of Medicine, Institute of Medical Physics. Under the supervision of Prof. dr. W.A. Kalender he worked on the optimization and dosimetric aspects of computed tomography.

Since January 2008 he is a clinical and research physicist at the Department of Radiology of the Erasmus MC University Medical Center.