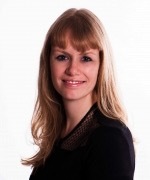 Currently, she is mainly working on disease progression modeling of neurodegenerative diseases. This work led to development of the Discriminative Event-Based Model (DEBM). Esther collaborates with the Progression Of Neurodegenerative Disease(POND) group at University College London, with whom she is organizing the TADPOLE challenge which evaluates which data, processing pipelines, and predictive models provide the best estimates of future AD progression.

In addition, Esther is coordinating the BIGR infrastructure for neuroimage analysis in multi-center studies, especially the image storage and analysis platform for the multi-center Heart-Brain Connection study. She led the pilot analysis for this study that demonstated the functionality of the infrastructure and the possibility of coupling and analyzing multi-center imaging and non-imaging data.

Esther obtained her PhD degree on March 9 2016 with her thesis entitled Advanced MRI Analysis for Computer-Aided Diagnosis of Dementia. In her PhD research under supervision of Prof. W.J. Niessen, dr. S. Klein and dr. M. Smits, Esther developed and improved multiple methods for computer-aided diagnosis of dementia. As part of this, she organized the CADDementia challenge which compared image-based diagnosis algorithms. In the CADDementia workshop at the MICCAI 2014 conference, she presented the results of this challenge. With this project, Esther was nominated for the Dutch Data Prize 2014 and won a Best Scientific Paper Presentation Award at the European Congress of Radiology in 2015.