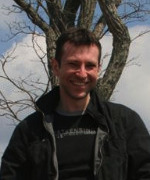 From 2003 to 2005, he was a Research Assistant (postmaster program “Mathematics for Industry”) at the department of Mathematics and Computer Science of Technical University of Eindhoven, the Netherlands. In 2005 he graduated on the project “Design and implementation of a six camera scanning unit” and was awarded a Professional Doctorate in Engineering degree (PDEng).

From 2005 to 2009 he was a Ph.D. student at the Departments of Medical Informatics and Radiology of the Erasmus University in Rotterdam, the Netherlands. In 2009 he got a Ph.D degree after defending his thesis entitled “Particle Filtering Methods for Subcellular Motion Analysis”.

Since February 2009 he is a postdoctoral researcher at the Departments of Medical Informatics and Radiology of the Erasmus University in Rotterdam, the Netherlands, conducting research on in-vivo molecular image analysis.

After receiving the VENI grant in 2011, he is currently working on Adaptive Bayesian Motion Analysis Techniques.

Since 2015, he is working on an in vitro high-throughput screening assay for novel microtubule active drugs within his Erasmus MC Fellowship.